Apple held an education event today, in a high school in Chicago. They announced some new products, including a new iPad, an updated Classroom app, and a new Schoolwork app. These apps look nice, and are directly aimed to compete with Google Classroom. I don’t think they’ll move the needle much, and I think Google Apps for Education will continue to dominate the educational landscape. I’m personally all in with Apple hardware, and I’m an Apple Distinguished Educator, so I like seeing Apple compete in this space. But I won’t be using Classroom or Schoolwork, or teaching with iPads, for a number of reasons. 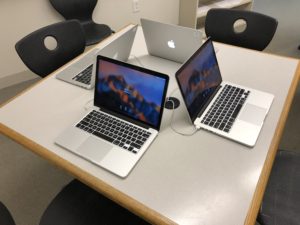 When given a choice, students use laptops to get their work done. How do I know this? I work at a school where students can use whatever they bring, or they can use our stuff. They bring Macs, they bring Windows PCs, they bring Chromebooks, and they bring iPads. But the iPads are few and far between. My 55 AP Computer Science students are given MacBook Pros to use in class, but some bring their own devices, which is fine. Four bring their own MacBooks, five bring Windows devices. One brings an iPad, which he uses to manage his assignments but doesn’t program on. One student I know started last year in Physics determined to do all his work on an iPad. He turned in a beautiful lab report in October all done in Numbers. Then in November he stopped bringing the iPad, and started bringing a MacBook Air. My seventeen year old daughter likes drawing on the iPad Pro, but uses her laptop much more, and plans to buy a new laptop for college. If a generational change to touch computing is coming, it hasn’t yet reached fifteen year olds.

I teach Computer Science to students using a set of thirty MacBook Pros. Some students prefer to bring their own computers, which is fine, since we’re using free software in all my classes. (We do use Photoshop some, but students can grab a Mac just for that if they need to). Students live on their phones – I don’t want to choose to use a classroom management system that works on iPhones but not Android phones. This is where Google has nailed it. Using Google Classroom, I’m staying out of the Android vs iOS wars, and out of the Mac vs PC wars. Maybe I’m taking sides in the browser wars, but at least so far, Google Apps works pretty well in Safari and their iOS apps are pretty good.

The first section of last weeks Vergecast podcast has a great bit on Apple and the Education market.