In July I visited Tanzania with some friends.  We climbed Mt Kilimanjaro and went on a safari.  This post is about our Kilimanjaro hike.  You can see some safari pictures here. 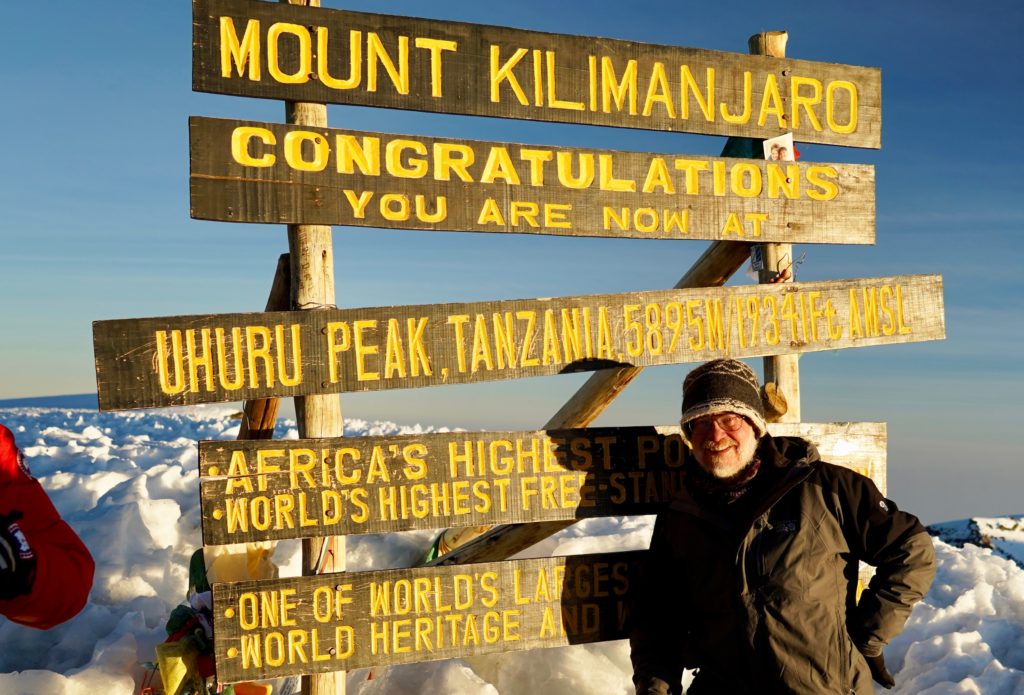 At the summit of Mt. Kilimanjaro

My trip was supported by a grant from FELS, the Foundation for Educators at Lincoln Sudbury.  This amazing organization raises money to support the personal and professional development of Lincoln Sudbury educators.  I am grateful for their help with this trip!

The most challenging part of the hike up Mt Kilimanjaro was the elevation.  The summit is 19,341 feet above sea level, where there is less than half as much air pressure as I am used to.   The duration of our trip was eight days, mostly to give our bodies time to adjust to the lack of oxygen.  We spent six and a half days climbing up the mountain, and only a day and a half climbing down!  I and most of my companions took a high altitude medication, Acetazolamide, throughout our trip.

Mt. Kilimanjaro is crowded in July, but our route took us away from the crowds for a good part of the climb.  We chose our route to give us plenty of time to enjoy the mountain and adjust to the altitude.  We also chose to spend a night in the crater, above 18,000 feet.

At the start of our trip, we spent two nights in Arusha National Park getting to know our guides and fellow hikers.  We stayed in luxury tents at about 7000 feet elevation on the slopes of Mount Meru, so part of the reason for this was to begin adjusting to the altitude we would face.   Arusha National Park had some interesting wildlife, and we saw giraffes and zebras, and heard Cape Buffalo grazing outside our tents at night. 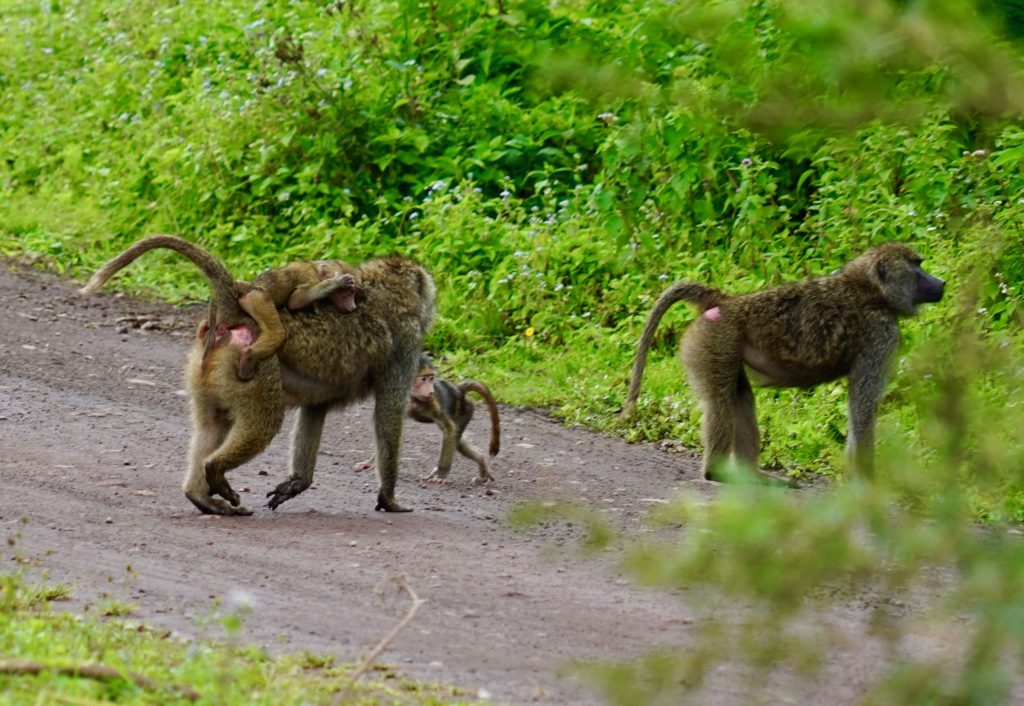 We started our hike at Machame Gate, and met the horde of porters who would carry our tents, food, tables, chairs, and more up the mountain.  There were more than sixty porters supporting our trip of eight paying guests!  Each porter is allowed by regulation to carry twenty kilograms (44 pounds) of gear for the trip, but they also carry their own clothes and sleeping bag.   There were also several assistant guides and cooks supporting our trip. 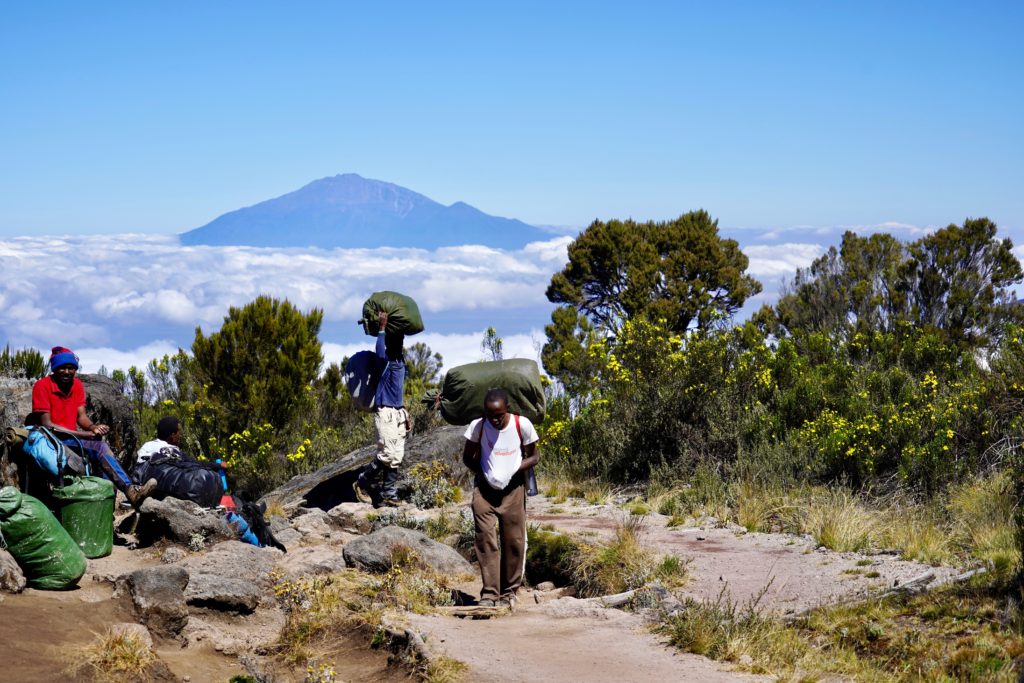 On the trail, porters outnumber guests by a large margin.

The first three days of our climb followed the Machame Route, one of the most popular routes up the mountain.  The camps we stayed at had many other  groups, but were spread out enough to not seem too crowded.  After the first day we were pretty much above the clouds for the rest of the trip.  We split from the Machame Route after the third night. 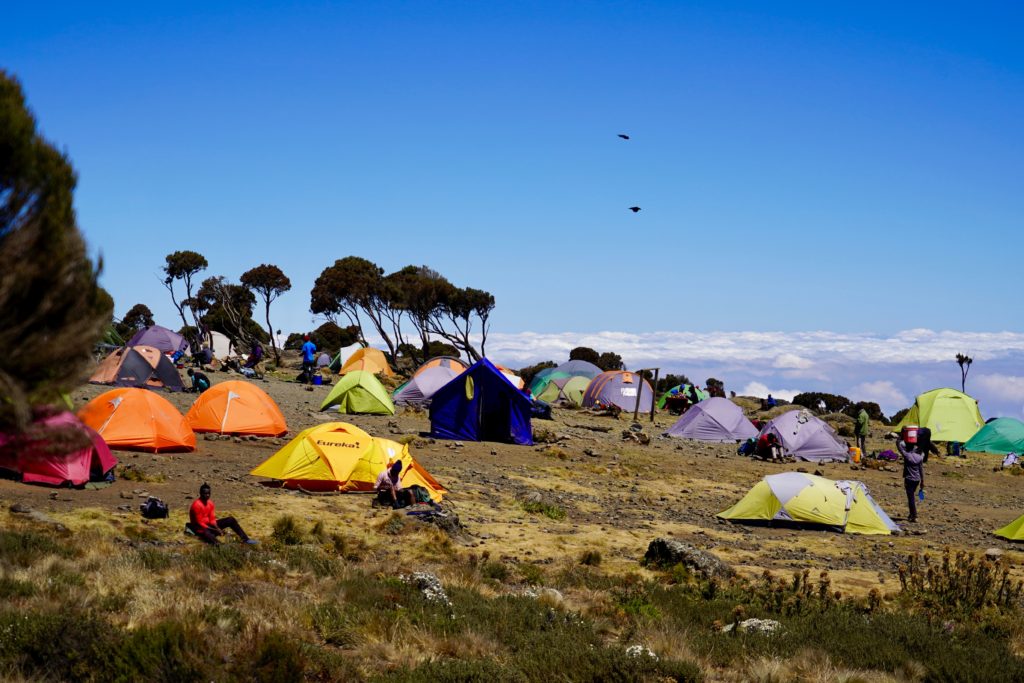 Shira camp, where we stayed our second night on the mountain. Many other groups were camping there.

Our fourth and fifth nights on Kilimanjaro were spent at Arrow Glacier Camp.  It felt luxurious to not hike for a day, and our meals were leisurely.  We went on a short hike and learned about some of the safety gear that the group had brought. 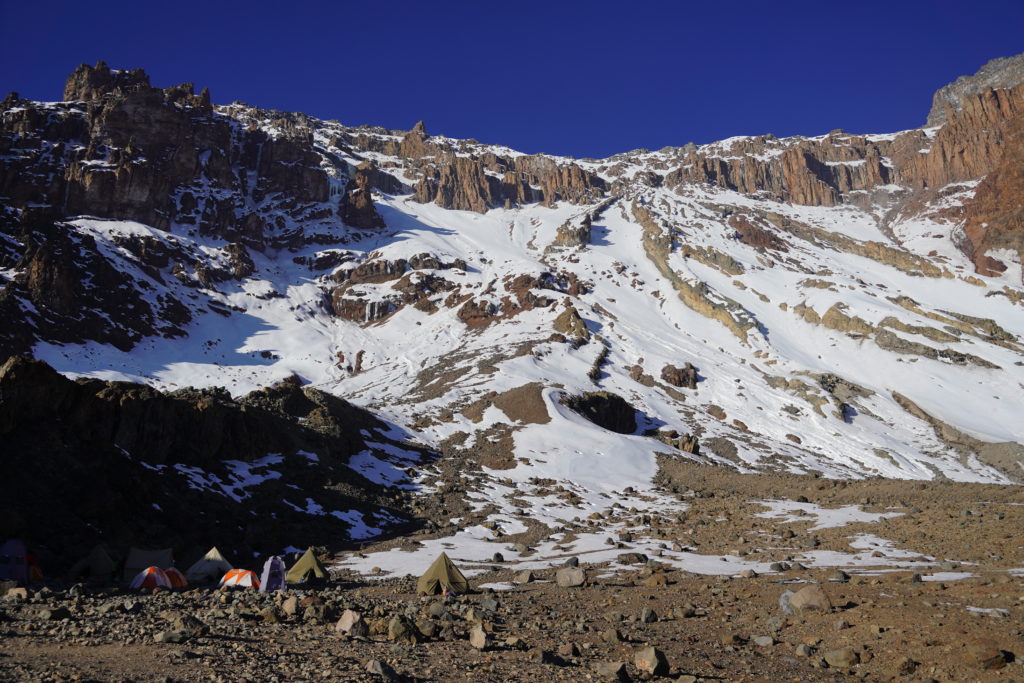 We stayed two nights at Arrow Glacier Camp. Our route then led up a steep slope to the Western Breach.

The most interesting was the Gamow Bag.  A person suffering from altitude sickness can climb into the bag, which is then zipped up.  A hand pump is used to inflate the bag to several PSI above the ambient pressure.  This is equivalent to descending about 3000 feet.  The whole can then be carried by about 6 porters down the mountain, while one person keeps pumping to refresh the air in the bag. 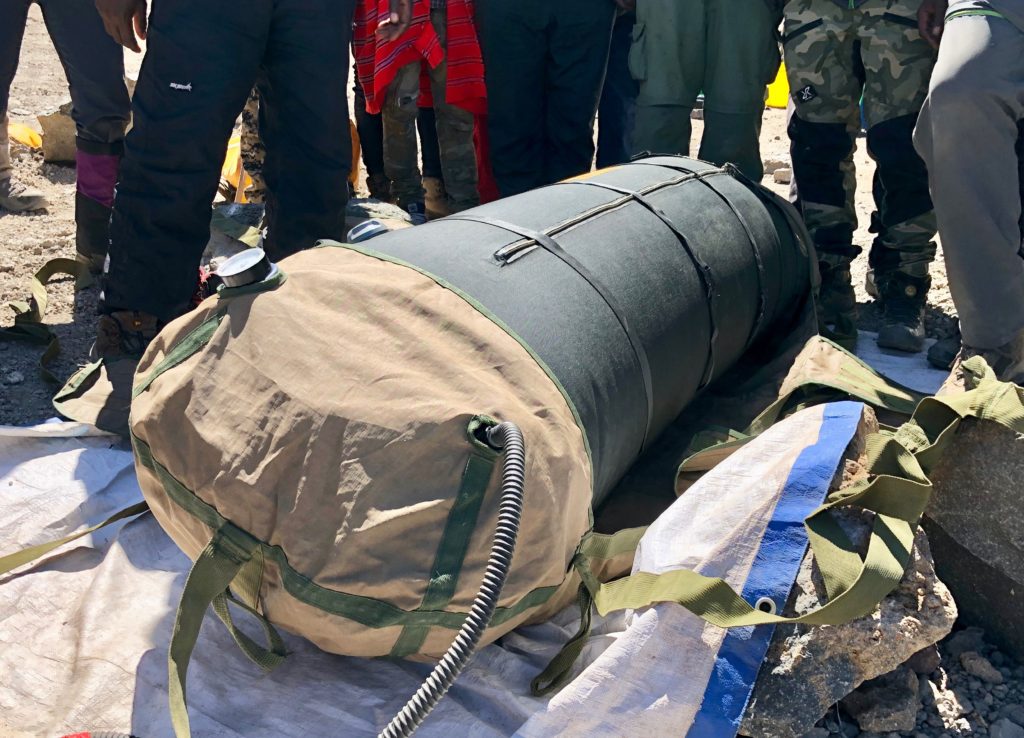 Our sixth day on the mountain we ascended the Western Breach.  This hike was qualitatively different from the other days of our trek. The route was not well marked, and our guides made a lot of choices about what would be easiest and safest.  Much of the route was over snow. 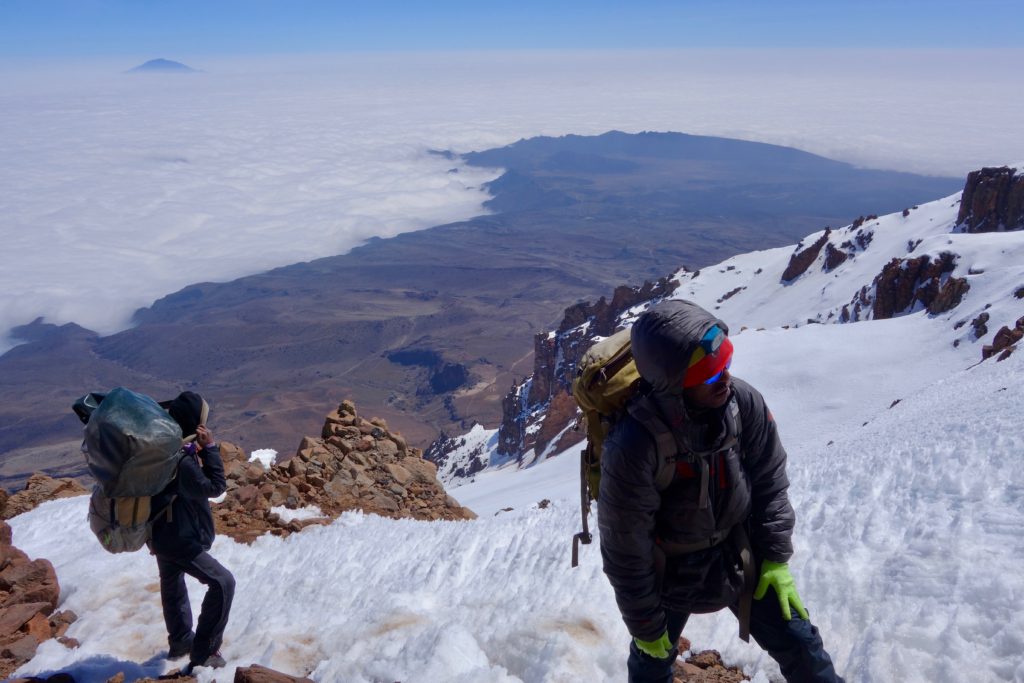 We went very slowly due to the steepness and elevation.  We also wore helmets to protect against falling rocks.  We started at 5:30 AM, and arrived at the crater rim around 1pm.  From there it was only a short walk through the crater to our camp.

Staying in the crater just below the summit of Mt Kilimanjaro was an amazing experience.  There are still glaciers in the crater, and the ground was completely snow covered.  We could see the summit, and could even see the sign at the summit. 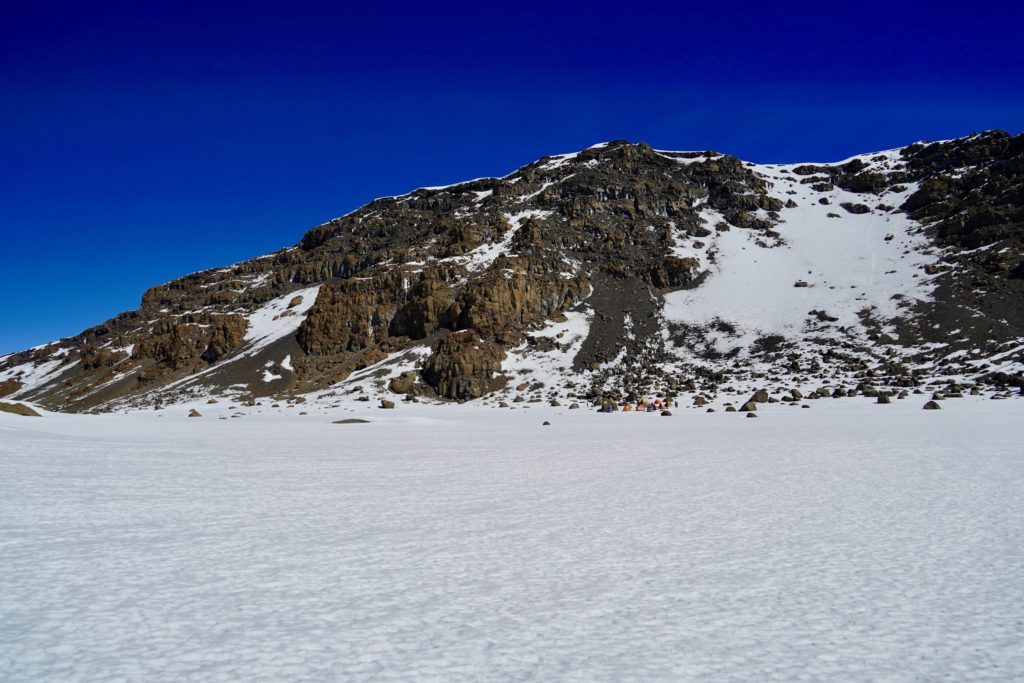 In the crater, looking at the summit. If you look carefully you can see our camp at the edge of the crater.

This hike was difficult for the porters as well, and some of our amenities, such as the dining tent, table, and chairs, did not come up to the crater.  We ate our meals in the cook tent, which was warm but cramped.

Most people who climb Mount Kilimanjaro stay the night before they summit at a much lower elevation.  They start hiking to the summit at or just after midnight.  Our trip was not like that at all.  We got up early by choice, since we wanted to be at the summit for sunrise. 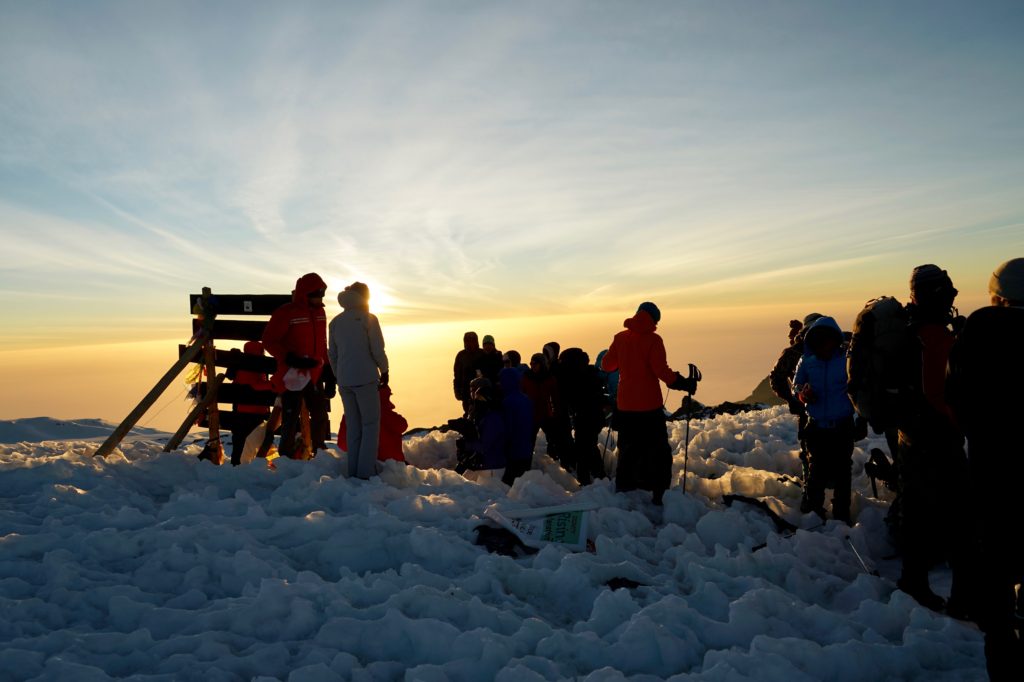 Sunrise at the summit. Crowds are already gathering.

We started hiking around 5 AM, and reached the summit a little after 6.  The summit was crowded!  We quickly took some pictures and within about an hour we were headed back down.  It took all that day and the next morning to hike out.  We stayed a night in Arusha before heading out on our safari.