I spent the past week in Kansas City, Missouri reading the AP Computer Science Principles exam.  “Reading” is a euphemism for “grading”, and I graded somewhere between 300 and 400 student responses over the past week.  I’ll write here about my experience grading the exams, but won’t get specific about the exam responses I read – those responses belong to the students who wrote them and to the College Board. 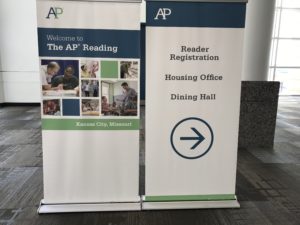 I left my home in Maynard just after noon on Saturday, June 9, and returned in the late afternoon of Sunday, June 17.  The reading itself is seven days long, so with a travel day at each end I spent a full week including both weekends. 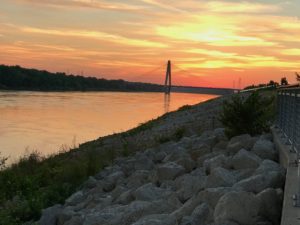 While in Kansas City, I got up each day at 5AM so I could get in a run in the morning.  There was a running path along the Missouri River that was quite nice, though there was a half mile each way of running along Main Street to get to it.    Grading started at 8AM and ended at 5PM each day, with an hour for lunch.  In the evenings I was exhausted, so I either read a book or hung out with my fellow graders, and went to bed each day around 10PM.

The grading took place at the Kansas City Convention center, in the “Power and Light District” of Kansas City.   My hotel was just a block from the Convention Center, so if I hadn’t managed to run in the mornings I would have hardly moved all week. There were three other AP Exams being graded at the same time:  Statistics, English Literature, and Biology.  These exams had way more graders that Computer Science Principles, so in all there were several thousand readers at the reading. 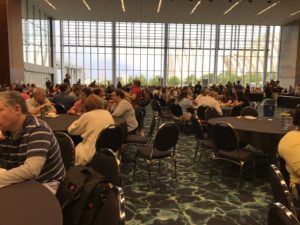 This is half of the dining hall at lunch time.

After a brief all hands meeting on Sunday morning, the hundred and fifty or so people that were grading the same question as I was received an hour long training on a detailed rubric for grading the question  We then moved to our home for the next week, a classroom sized room with seats and computers for twenty seven people.   We were organized into three “tables” of nine.  Each table had a table leader, who had come several days early to help establish the rubric, and eight readers.

We started with more training.  Using the rubric we had discussed, we graded student work and compared our scores to the scores assigned earlier by the trainers.   We did all this on the supplied computers in a web browser based interface.  When we were deemed ready, we started grading in earnest.   We looked at one student response at a time and submitted our scores.  Then another student response appeared.  This went on for six days, though it went surprisingly quickly.   There was a good deal of banter in the room.  Table leaders provided occasional feedback – they could see student work along with our scores, and they worked as quality control.   The focus from the table leaders was on accuracy, rather than speed.

Students who take AP Computer Science Principles need to turn in two projects during the year, in addition to taking a multiple choice exam.  The first one, called “Explore”, is a short research project on a computing innovation.  The second, called “Create”, is a programming project.  Each have very specific criteria set out in the College Board guide for the course.

Last year, I read the project criteria for the two APCSP tasks and explained them to my students as best I could.  Seeing how these criteria were turned into a rubric, and then applying that rubric to hundreds of student projects has brought those criteria into sharper focus.  I will certainly be able to better prepare my students for the tasks.

Finally, I learned how the sausage is made in a way that I only could by seeing it.  On one hand, the AP test process is very reductive, turning a year’s worth of learning into a single score of one through five.  On the other hand, I learned that the people doing it care deeply about fairness and equity in the process.

At the end of the reading there is a not-very-subtle exhortation to come back in future years.  They need a lot of readers!  I’m not sure if I’ll read again, but I think it was a good experience and I’d encourage any teacher of an AP course to give it a try.

Summer is almost here, and I’m looking forward to it.  But I’m also full of ideas for the upcoming school year, when I’ll have two full sections of AP Computer Science Principles.