Running in the Future

Yesterday I picked up my Apple Watch Series 3  with LTE (black stainless 42mm) at my local Apple Store.  The setup was smooth, including getting the watch connected to Verizon.  I played with it a little yesterday, sending some texts with my phone off.   This morning, however, I put it through its paces – a six mile run, no phone.  This is its raison d’être – or at least its raison de purchase. 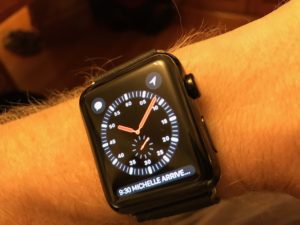 When I left home, I put my AirPods in my ears and connected them to the watch.  I put on some music, and walked outside to stretch.  As I walked away from my house, the music hiccuped a bit.  At the same time, my watch was holding onto WiFi, presumably from my house, after it should have connected to LTE.  My phone does the same thing sometimes, in the same place.   I’m not sure why this affected music playback, but it seems to have, since as I walked a little farther and the watch finally connected to LTE,  the music settled down and didn’t glitch again for the whole hour I was out.

Right before I started running, the watch was at 99% battery. 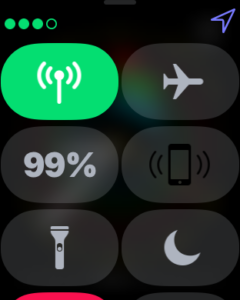 I started a run, using GPS and the heart rate monitor.   I kept the music on the whole time, having synced a playlist to the watch before I started.  I sent and received several messages.  I got Apple News and Airmail notifications.   I sent one message to my wife to check my location on Find my Friends, and she reported my location accurately. 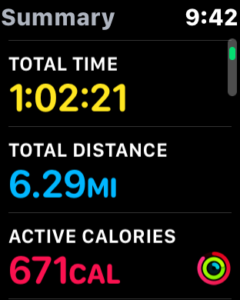 At the end of this run, the watch had 67% battery remaining. 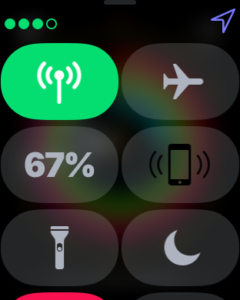 This might seem like an alarming battery drain in just an hour, but I think its fine.   It means I could handily go for a two hour run without a phone.   After my run, I put the watch on its charger while I took a shower, and put it back on at about 85%.  As I write this, at 10:30pm, it’s at 60%.  Apple has made the watch so efficient under normal, phone connected use that I’m comfortable with short bursts of heavy battery use.

I am looking forward to Apple Music streaming, though I wonder how much more battery that will use.  I’m hoping Apple either provides its Podcast app on the watch, or even better gives developers the tools they need to make podcast apps work properly.

I’ve been running with my phone for years.  I’ve worn it on my arm, worn it on a belt, and carried it in my hand.  It was fun to run without it, and I’ll do that at least some of the time now.  When I can listen to podcasts on the watch I’ll probably leave it behind all the time.

I’m looking forward to that future, but the present Apple Watch is pretty good.